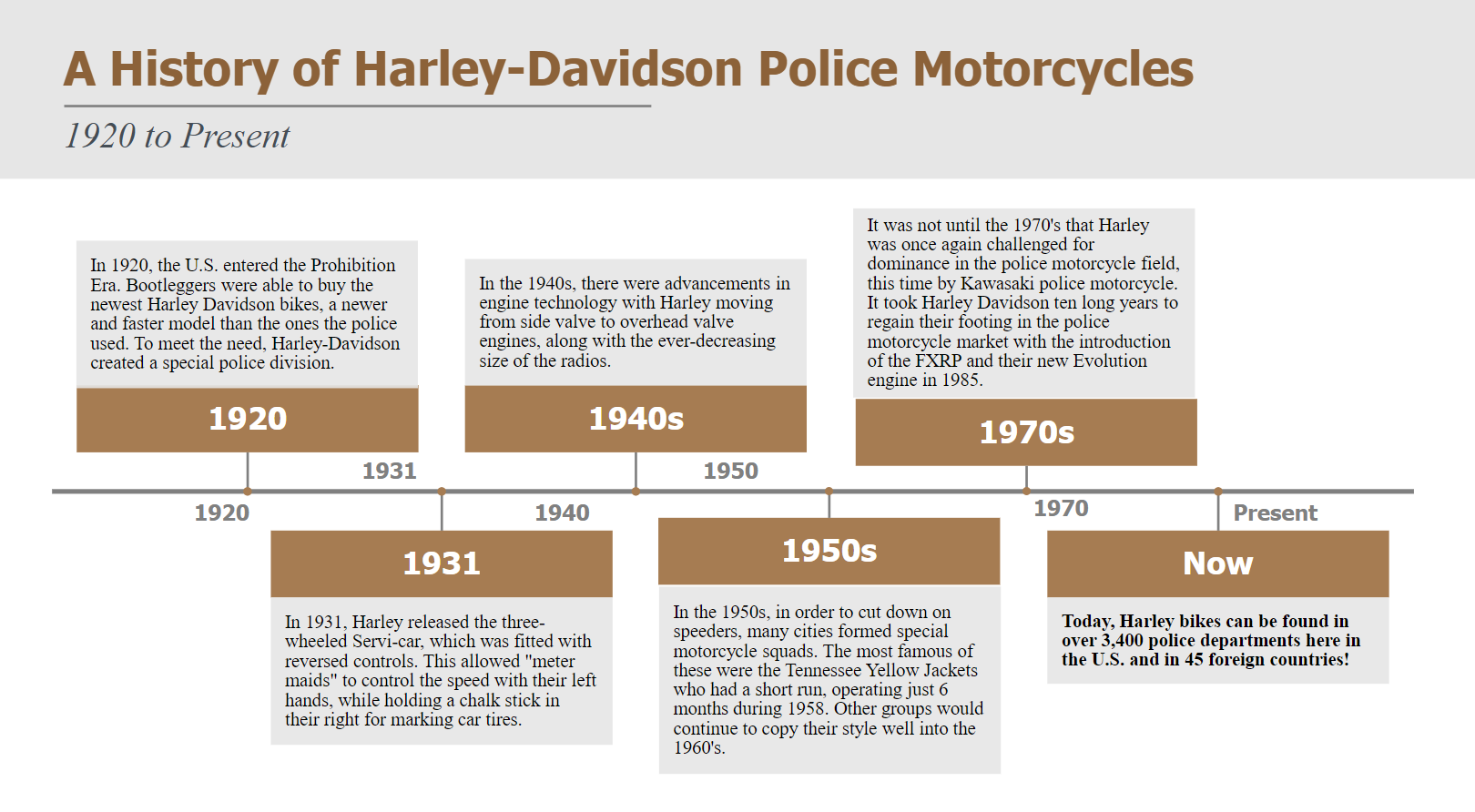 The very first Harley-Davidson police motorcycle was delivered to the Detroit Police Department in 1908. Right from the beginning, police departments recognized the tactical advantage provided by these maneuverable motorcycles, along with Harley Davidson’s stellar reputation for reliability. Harley-Davidson has maintained the 100 plus year relationship with law enforcement as well as military agencies through innovation and technological excellence.

When the first Harley Davidson police motorcycle was sold, the United States was a much different place. There were only 144 miles of paved roads in the entire country so Harley’s off-road prowess was one of their main draws. They were also faster and handled better than the horse and the automobile. Those distinct advantages made the motorcycle a natural choice for patrolling the mostly rural United States.

The first police models were much like civilian bikes, but with different paint and markings. It would be a great many years before options like flashing lights and sirens would be possible. Still, they gave the police enough of an advantage that they were able to successfully perform their duties without the need of specialized equipment.

That changed in 1920 when the US entered the Prohibition Era. Bootleggers were able to buy the newest Harley Davidson bikes, a newer and faster model than the ones the police used. Automobile sales began to skyrocket in the 1920’s, with 13 million cars hitting U.S. roads by 1923, up 162,500 percent since the first Model T rolled out in 1908.

The need for more police motorcycles was greater than ever and Harley-Davidson created a special police division to meet the rising demand for machines. By the end of the Roaring 20’s, Harley-Davidson motorcycles were in use by 3,000 police departments in the US, more than double what they had been at the beginning of the decade.

The 1930’s marked a decade of innovation for Harley Davidson police models. In 1931, Harley released the three-wheeled Servi-car, which was so popular with police departments that it was produced into the early 1970’s.  At the request of police, the Servi-car was fitted with reversed controls. The throttle was on the left and the hand shift was on the right.  This allowed “meter maids” to control the speed with their left hands, while holding a chalk stick in their right for marking car tires.

Although World War II and its aftermath dominated much of the 1940’s, there were some developments in police motorcycles during this time. There were the obvious advancements in engine technology with Harley moving from side valve to overhead valve engines, along with the ever-decreasing size of the radios, but the introduction of fully armored motorcycles is certainly worth mentioning.

Indian Motorcycles closed their doors in 1953. That left Harley-Davidson as the sole U.S. motorcycle manufacturer and allowed Harley to continue its expansion during a time that was once again plagued with an increase in automobile fatalities. To help crack down on speeders, many cities formed special motorcycle squads.

The most famous of these were the Tennessee Yellow Jackets. Easily spotted on their yellow and black motorcycles with matching uniforms, the Yellow Jackets had a short run, operating just 6 months during 1958, but they left a lasting impression. Other groups would continue to copy their style well into the 1960’s, all of them riding Harley-Davidson motorcycles, of course.

Today, Harley bikes can be found in over 3,400 police departments here in the U.S. and in 45 foreign countries!

The latest motorcycle models include all the bells and whistles, from air ride adjustable seats to saddlebags that can be opened with one hand. As long as Harley Davidson remains in business, there is no doubt that they will continue to produce police motorcycles, based on the best machines they have to offer. Just make sure you keep an eye on the speed limit when you ride past one!

Please donate by entering the Harley Bike Giveaway today! Thank you for your support! 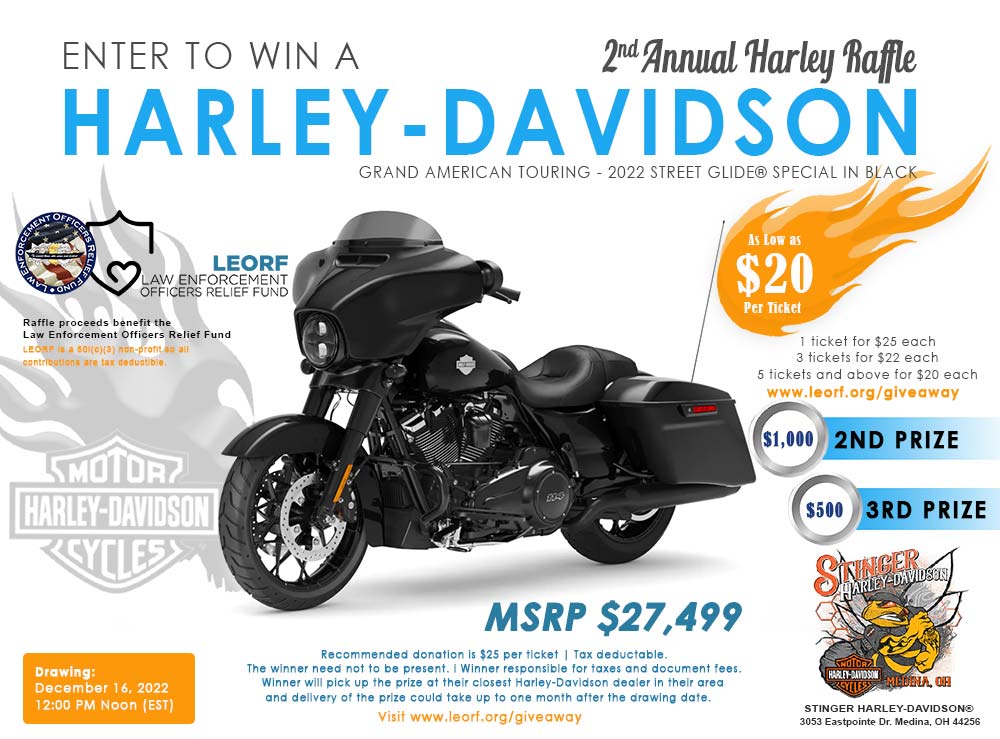 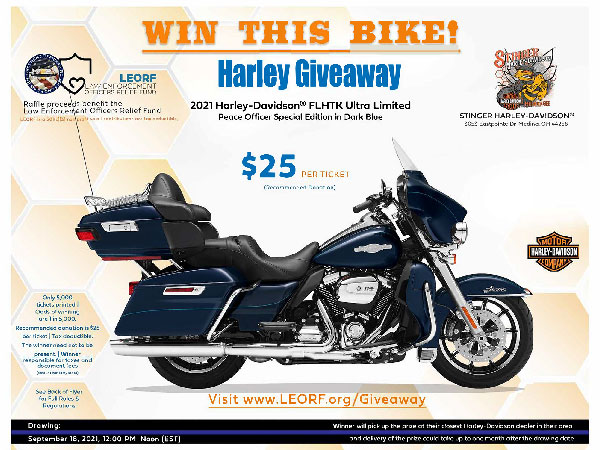 Donate to LEORF and Win a Harley Bike While Helping out LEOs and their Families!

Donate to LEORF and Win a Harley Bike While Helping out LEOs and their Families!